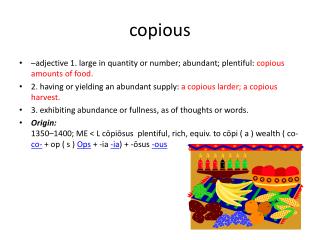 copious. –adjective 1. large in quantity or number; abundant; plentiful: copious amounts of food. 2. having or yielding an abundant supply: a copious larder; a copious harvest. 3. exhibiting abundance or fullness, as of thoughts or words. EOC Vocabulary List - . inference- (n.) the process of arriving at a conclusion. to infer is to conclude. evaluate –

Malaria - . by anne. the tropical coast →copious amounts of rain (up to 30 feet). in the northern→ much lower

review of vocabulary procedure - Every monday you will receive 10 vocabulary words that you will be tested on, the

Roman Historiography - . republican. syllabus. purpose: this course is about latin, history and historiography. our

The Endocrine System Part B - . 16. oxytocin. oxytocin is a strong stimulant of uterine contraction regulated by a

TrachoEsophagial fistula (TEF) - . f.ghaseminia. a tracheoesophageal fistula (tef) is a congenital or acquired

Vocabulary Week 17 Gold - . word 1: lackluster def: not exciting, dull sent: away from autos, the economy is growing at a