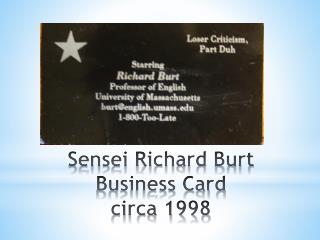 Sensei Richard Burt Business Card circa 1998 . Originally Proposed Conference Title. TACKY SHAKESPEARE. The title of my paper pays homage to this lost title, this title not entitled to be a conference title . . Here is the title of my paper:. “ITA-TACKY- MASU SHAKE-U-SPEARE” . Circa 1998 - Addiction – a tale of two survivors michael sprintz, do mark baskerville, md anesthesiology and

Business card - After hours creative is a graphic design and printing company that specialises in web design, print

Business Card - . what to include and design hints. business card layout and design

Circa Lighting - At salisburyandmanus.com, we offer a vibrant range of circa lighting products in chandeliers and pendant

Business Card Boxes - Business card boxes are important in many ways and are available in different styles. use the boxes

Business Card Perth - Bps design and digital print are known for the best business cards printing in perth, all you need

11 Parts of a Business Card - . how many of these elements does your business card design have?. by jacci howard bear ,