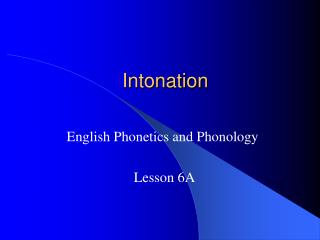 Intonation. English Phonetics and Phonology Lesson 6A. The functions of intonation. Attitudinal function Accentual function Grammatical function Discourse function. Speech may be divided into tone units. Each tone unit is composed of:. A tonic syllable (obbligatory) INTONATION - . pitch accents: sudden and steep rises and falls in pitch. the four important movements (not in the book)

Intonation - . a way a speaker express their ideas and feelings. intonation what is it &amp; how is it used?.

INTONATION - . (chapter 17). tone-unit. when a tonic syllable is followed by a tail, the tail continues and completes the

INTONATION - . islam m. abu khater. what is it?. ► intonation is the variation of pitch when

Intonation - . lecture 11. let’s consider the following example first:. question: what is the difference in the way the

Intonation - . how we say something is as important as what we say. can change/affect the meaning of a sentence. can

3.4 Intonation - . intonation involves “the occurrence of recurring pitch patterns, each of which is used with a set

Guitar Intonation - . introduction. intonation happens after set up. intonation refers to the instrument being in tune

Intonation 2 - . chapter 16. what is an intonation language?. it is a language in which substituting one distinctive tone

Unit 2 Intonation - . learning objectives. 1.to understand the function of intonation in speech. 2. to learn rules in

STRESS AND INTONATION - . repeat these words after theteacher . ( a stress mark is placed over the end of syllable