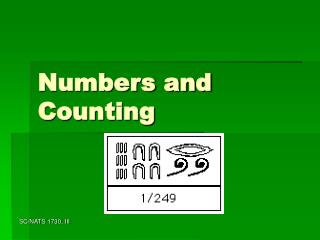 Numbers and Counting. Number. The fundamental abstraction. There is archaeological evidence of counters and counting systems in some of the earliest of human cultures. In early civilizations, counting and measuring became necessary for administration. Numbers and Agriculture. Multiples {1, 2, 3, 4, …} = Counting Numbers - Multiplying the counting numbers by a particular number gives us

Counting On and Counting Back - . unit of study: addition and subtraction strategies to 20 global concept guide: 1 of 5.

Counting On and Counting Back - . unit of study: addition and subtraction strategies part 1 global concept guide: 1 of

Counting and Probability - Slide 7-2. factorials. if we want to rearrange 7 people, we can use the multiplication