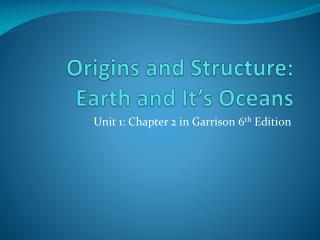 Earth Structure - . mexico quake-- magnitude at 7.0, and epicenter was in the western pacific state of michoacan . its

Oceans and seas - . by: brianna #14 . animals in the ocean. unlike some animals octopuses can blend in with their

LANDFORMS AND OCEANS - . science standard 5-3 the student will demonstrate an understanding of features, processes, and

Origins, structure and evolution of langauge - . what is language?. communication signals emitted by an organism whose

THE ORIGINS AND VARIETIES OF LIFE ON EARTH - . how was life first created?. hst101: lecture 7 craig benjamin. what were