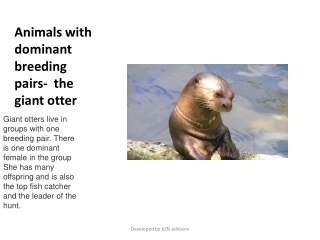 Sea Otter by Stephanie - . they do not have flippers but have four paws. furry animals. they like to eat clams, sea

History of Genetics - . people have known about inheritance for a long time. --children resemble their parents

“Breeding without breeding” with only forests and combined seed orchards/breeding populations - . dag lindgren and

Monohybrid and Dihybrid - . honors biology-ms. kim. what is a genotype?. a. brown hair b. homozygous dominant c. aattggc

Plants and Animals F ound - . on the lewis and clark expedition. please save questions for the end!!!. some of the

Marine Otter - . by ebony wooden . hello, i am ebony. i am a marine otter and my scientific name is . lontra felina.

Review: - . *unit factors in pairs - genetic characteristics are controlled by unit factors that exist in pairs in

“Breeding without breeding” with only forests and combined seed orchards/breeding populations - . dag lindgren and