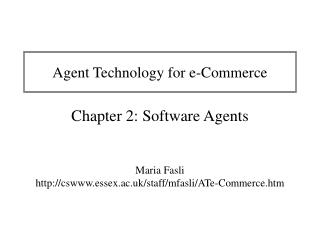 Agent Technology for e-Commerce. Chapter 2: Software Agents Maria Fasli http://cswww.essex.ac.uk/staff/mfasli/ATe-Commerce.htm. What is an agent?. A piece software (and/or hardware) that acts on behalf of the user