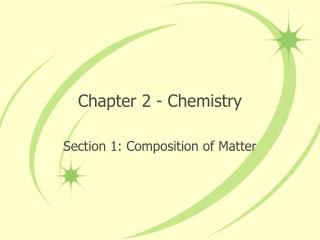 Chapter 2 - Chemistry. Section 1: Composition of Matter. Everything in the universe is made of matter Matter is anything that takes up space and has mass. Matter. Elements. Elements pure substances that cannot be broken down chemically into simpler kinds of matter