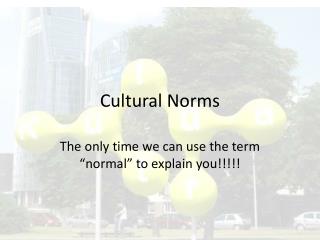 Cultural Norms. The only time we can use the term “normal” to explain you!!!!!. What is culture?. Definition : a collection of thoughts, actions, beliefs and ideals, shared amongst a group of people. Culture includes more than ethnic groups Sensitivity to Cultural Norms - . chris ball. what is it?. sensitivity to cultural norms is being aware and accepting of

Sensitivity to Cultural Norms - . david huang. ltalianman. what is it?. being aware and accepting of other cultures.

SOCIAL CULTURAL LEVEL OF ANALYSIS: SOCIAL AND CULTURAL NORMS - . a norm = a set of rules based on socially or culturally

Sociocultural Level of Analysis: Social and Cultural Norms - . part iv. cultural norms. there are many definitions of