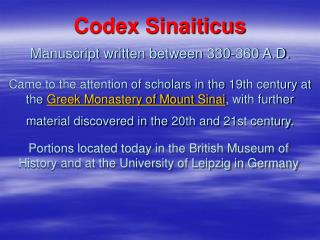 Manuscript written between 330-360 A.D. Came to the attention of scholars in the 19th century at the Greek Monastery of Mount Sinai , with further material discovered in the 20th and 21st century. Codex Sinaiticus. The Connections between Oral and Written Language - . july 16, 2012 eci 857. review some basic theories of language

Illuminated Manuscript - . any decorated or illustrated manuscript from the western traditions. history. in the most

Manuscript Form - . mr. morton cfs. n. 1. a handwritten book, poem, or other document, or a collection of such

Manuscript Revision - Why revise your manuscript before submitting to the medical

Manuscript Form - . unit 1 pages 2-3. what is manuscript form?. standards for writing pieces; required for all work in