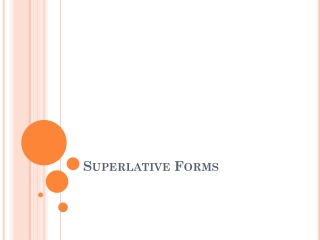 Superlative Forms. Superlatives compare three or more people or things. One syllable adjectives and adverbs: - Add – est at the end of the adjective/adverb. Use the before the superlative. (big) Sydney is the biggest city in Australia. Comparative and Superlative Forms - . but we use more, most before words ending in ed. for example: everyone was pleased

ADJECTIVES COMPERATIVE AND SUPERLATIVE FORMS - . jane is tall er than bob. bob. jane. robert is the tall est of

Comparative and superlative forms of adjectives - . where you are:. what is an adjective?. contents noun adjective

SUPERLATIVE ADJECTIVES - . start. adjectives of just one syllable form the superlative by adding

Superlative sentences - . eyes wide, mouth full, you ’ ll feel like you are in italy. on the hot platter from the oven,