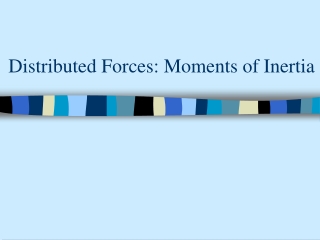 Distributed Forces: Moments of Inertia. The second moment of area about an axis is defined as the moment of inertia of area and is given by Note that elemental area of A must be chosen such that it is parallel to the axis about which i is being -----. DEFINITION OF MOMENTS OF INERTIA FOR AREAS, RADIUS OF GYRATION OF AN AREA - Today’s objectives : students will be able

Mohr’s circle can be used to graphically determine : a) the principle axes and principle moments of inertia of the

Motion and Forces - . what is a force?. a push or a pull. applied force changes the movement of the ball when you kick a

Purpose - . investigate which factors affect moments of inertia (such as length, mass, and shape). c alculate moments of

Forces - . physical science chapter 12. inertia. the tendency of an object to resist any change in its motion. if it is

Forces &amp; Motion - . inertia . inertia- the amount of force needed to move an object. how can unbalanced forces

Moments - . by amy 8y1. force. forces can make objects turn if there is a pivot. think of a see-saw. a pivot is the thing

Inertia and mass - . please begin your bellwork thanks!. bellwork : pick up the workbook and get out your notebook write

PHYSICS FORM 4 - . inertia. objectives. to know the exactly definition of inertia. to analyze the relationship between

MOMENTS OF INERTIA (Chapter 10) - . today’s objectives : students will be able to: a) define the moments of inertia

Forces and Moments MET 2214 - . moments and forces. part 4. moment of a couple. a couple is defined as: two parallel

Inertia and Momentum - . definition: inertia: measures an object’s tendency to remain at rest or stay in constant