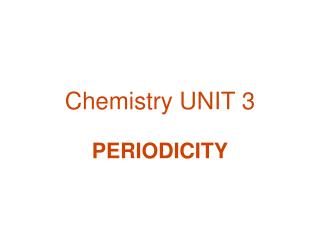 Chemistry UNIT 3. PERIODICITY. 3.1 The periodic table. 3.1.1 Describe the arrangement of elements in the periodic table in order of increasing atomic number. Metalloids. Metalloids are the elements found along the stair-step line that distinguishes metals from non-metals.