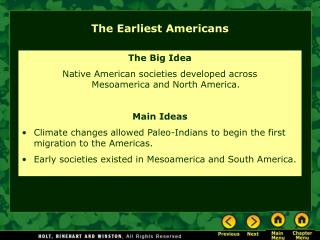 WESTWARD EXPANSION: The “Manifest Destiny of Americans?” - . manifest destiny – a phrase used by leaders and

Top 100 Most Influential Americans of All Time The Atlantic Magazine - . 100. moby dick was a flop at the time, but he is

Impact of Westward Expansion on Native Americans and the Role of Government - . event exploration. your task. analyze the

ASIAN AMERICANS: GROWTH AND DIVERSITY - . chapter 12. asian americans and pacific islanders. diverse group that is one of

World War II on the Home Front - . u.s. “isolation” and the “surprise attack” on pearl harbor the wartime

Aim : How did President Bush continue the policies of President Reagan? - . introduction. by the early 1990s, americans

Latin Americans in the American Political Process - . latino population. in 2007, by nationality mexican 29,189,334