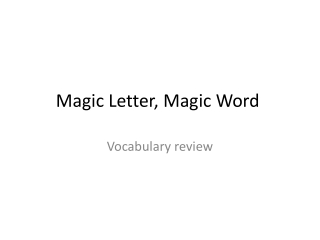 Magic - . comes from the latin word “ magus ” – meaning a wise man or a miracle worker. magic assumes that humans

Magic? - . what happened first ? then what did you all do? then what you changed to accomplish the task?. my development.

Magic - . by daniel chong. what is magic?. perform arts creating illusion http://www.youtube.com/watch?v=mgfyupudy7y. how