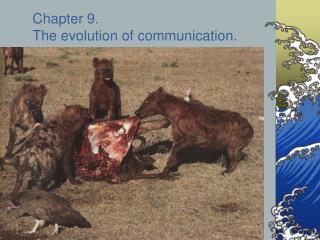 Chapter 9. The evolution of communication. Chapter 9. The evolution of communication. Hyena social behavior. Hyenas live in social groups called clans. Clan members defend a territory and hunt in groups. Females are the dominant members of the clan and have a clear dominance hierarchy. Dominant females have higher

Chapter 9. The evolution of communication.

Hyena - . written by. chase. fortkamp. 2011. protection. they hunt at night so other animals don’t see them. the hyenas

The Hyena - . mr. scott dahm media specialist johnson elementary. what i already know:. they are strange-looking –

Hyena - . by ryann y. physical characteristics. the hyena is brown with black and white spots it is striped and has

Hyena - . written by colson elliott. protection. i. its skin is camouflaged with grass. its teeth are strong enough to

Hyena - . created by: jack shanley june 2010. introduction. you were in africa walking in the wild and you hear something