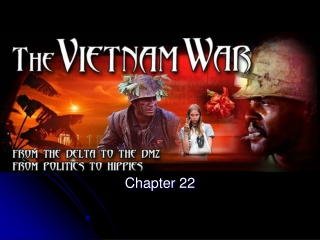 THE VIETNAM YEARS. Chapter 22. Moving Toward Conflict. Section 1. Vietnam is a long, thin country on a peninsula in southeast Asia. From the late 1800’s until WWII, France ruled Vietnam. The French treated the Vietnamese badly. As a result, the Vietnamese often rebelled. The Vietnam War Years - . who should be exempt from the draft?. moving toward conflict. main idea to stop the spread of

The Vietnam War Years - . big idea: who should be exempt from the draft?. america supports france in vietnam. americas

Vietnam War Years - . ms. garratt chapter 22:. origins of us involvement. us put pressure on allies to get rid of

Sec. 3 The Vietnam Years at Home - . many americans opposed the nation’s involvement in vietnam. many others believed