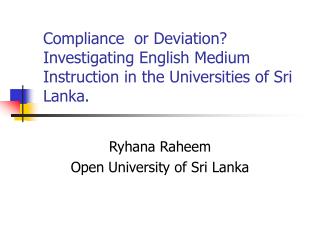 Sri Lanka - . land and climate. the island nation of sri lanka sits fewer than 20 miles off the coast of india. covering

Sri Lanka - . paul. flag. on the flag of sri lanka, it has yellow, one lion, red, orange, four papers and one sword.

Sri Lanka Dialogue - Durham is astounding!. durham, i have come to realise, has a capacity to astound out of all

Sri Lanka - . history:. under british control from 1815 until independence in 1948 name changed from ceylon to sri lanka