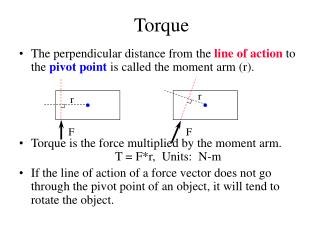 r. r. F. F. Torque. The perpendicular distance from the line of action to the pivot point is called the moment arm (r). Torque is the force multiplied by the moment arm. T = F*r, Units: N-m Torque Converters - . purpose. allow the vehicle to come to a complete stop without stalling the engine provide torque

FIGURES FOR CHAPTER 3 - Torsion. figures for chapter 3. click the mouse or use the arrow keys to move to the next page.

Vector Control of Induction Machines - . introduction. the traditional way to control the speed of induction motors is

OBJECTIVES - . after studying chapter 9, the reader should be able to: identify the components of a torque converter.

Equilibrium and Torque - . equilibrium. an object is in “equilibrium” when: there is no net force acting on the

Torque - . tough nut. which of the four arrangements is best for tightening a bolt?. a. b. c. d. pivot point. rotation of

Definition of Torque - Torque is a twist or turn that tends to produce rotation. * * * applications are found in many