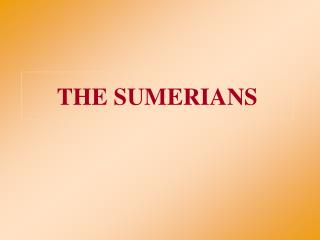 THE SUMERIANS. THE FERTILE CRESCENT. Aswan Dam Draining of the Marshes. Pre-requisites for Civilization. Agriculture developed in the Fertile Crescent around 9000 bce Mining and use of copper around 6000 bce Growth of villages and towns Division of labor The Sumerians - . mesopotamia. live in fertile valleys mesopotamia means “between the rivers” tigris and euphrates.

The Sumerians - . the first culture. the city states of sumer. consisted of the central city and the surrounding

The Sumerians - . city states religion writing system legacy. background. they were the first civilization of the middle

THE SUMERIANS - . sumerian civilization. the fertile crescent. aswan dam draining of the marshes. pre-requisites for

SUMERIANS - . by: henry, grant, and ties. political system. sumerian city-states were run by kings all of the city-states

Sumerians - . weaponry. the sumerians relied on many materials to make their weapons, a few are copper, tin, and bronze

FIRST SUMERIANS - . sumerians first arrived in region around 5000 bc typical paleolithic people motivated by search for

Ancient Sumerians - . situated between the tigris and euphrates in the heart of modern-day iraq on a dry, flat, hot

Ancient Sumerians - . flooding was common along the tigris and euphrates . mesopotamia was located in modern day iraq.

FIRST SUMERIANS - . sumerians first arrived in region around 5000 bc typical paleolithic people motivated by search for

Sumerians and Mesopotamia - . amh mr. moran uhs. nomadic tribes who settled in the fertile crescent peoples from between

Sumerians and Babylonians - . wg1.3. the sumerians. the first great mesopotamian civilization was the sumerian , which

Early River Civilizations Mesopotamia and the Sumerians - . world history pullen. mesopotamia- the land between the

The Early Empires of Ancient Mesopotamia: The Sumerians - . the ancient fertile crescent area. the middle east: “the

Who were the Sumerians, Babylonians, and Assyrians? - . understanding who they were and where they were from, and the