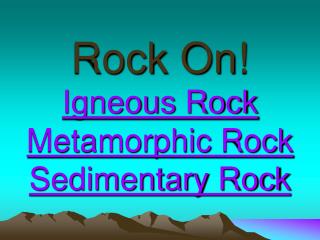 7 Quick Tips to Rock Your Next Presentation - Getting ready for your next presentation and need some help preparing?

History of Rock and Roll Introduction - . what is “rock and roll” and who coined the term? answer on slide 142. rock

Abseil (V) - to go down a steep cliff or rock while attached to a rope , pushing against - The slope or rock with your