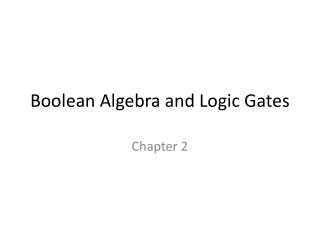 Boolean Algebra and Logic Gates. Chapter 2. Basic Definitions. Boolean Algebra defined with a set of elements, a set of operators and a number of axioms or postulates. A set if a collection of objects having a common property. Elements. x is an element of set S.