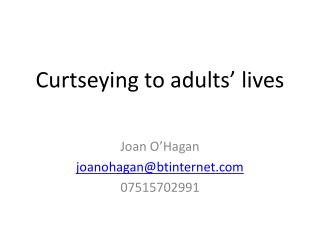 Curtseying to adults’ lives. Joan O’Hagan joanohagan@btinternet.com 07515702991. When is it helpful to mathematize our real life decisions? (sub-text: what maths do adults really really want?) Is it rational to be emotional / intuitive about these decisions?. Lifestyle Disease’s - . heart disease facts. leading cause of death in the united states for adults 1 in 4 adults are

FINANCIAL EXPLOITATION OF VULNERABLE ADULTS - . for employees of financial institutions, broker-dealers and investment

The Lives of Stars - . the deaths of giants. last time. last time, we traced the evolution of a star, starting with the

Narrowing the Gap in Vaccine Coverage Among Adults - . educational learning objectives. at the conclusion of this

Tactics for Increasing Immunization Coverage Among Adults - . educational learning objectives. at the conclusion of this