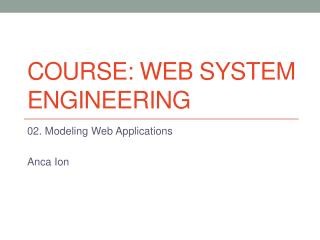 From SysML to UML Does SysML improve Software Components Design in a System Engineering Project?

MSE 280: Introduction to Engineering Materials “Because without materials, there is no engineering.” - Instructor:

Effective? use of VITAL (in Engineering) - . tim bullough, engineering with thanks to: john marsland, electrical