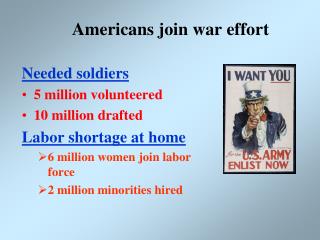 WESTWARD EXPANSION: The “Manifest Destiny of Americans?” - . manifest destiny – a phrase used by leaders and

SQL Unit 8 Subqueries with IN, Joins, and Other Topics - . kirk scott. 8.1 queries that can be done with a join or with

In A Cooperative Effort with - . presents. early response team. providing a caring christian presence in the aftermath of

Principles and Practices of Hazard Control - . the less human effort for fall protection, the more effective the fall

ASIAN AMERICANS: GROWTH AND DIVERSITY - . chapter 12. asian americans and pacific islanders. diverse group that is one of

Impact of Westward Expansion on Native Americans and the Role of Government - . event exploration. your task. analyze the

Myers - . given away at birth to another adult, for an unknown reason loved the game of basketball smart student in high

World War II on the Home Front - . u.s. “isolation” and the “surprise attack” on pearl harbor the wartime

Nominal Calculi for Transactions: ZSN in JOIN II - Models and languages for coordination and orchestration imt-

Sponsored Effort Nuts and Bolts at UD - . how to ensure accurate data for effort certification…make your life easier!.

A People’s History of the United States By: Howard Zinn - . chapter 16: a people’s war?. howard zinn during world war