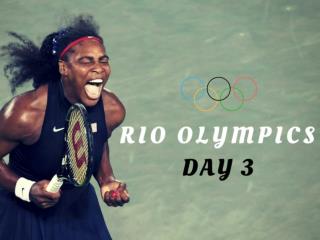 Highlights from the third day of competition at the Rio Games.

Ancient Olympics - . stade means…. a house or home a race stay in one place the length of one step. truce means…. to

BMW &amp; THE LONDON OLYMPICS 2012 - . technology worth a gold medal. bmw is an official partner of the olympics, but

The London Olympics 2012 - . the olympics were made in olympia, greece by ahyoung. questions and answers. 1 what country

Ancient Greek Olympics  - . the first olympics games are usually given the start year of 776 bce, but they probably

BMS Reading Olympics! - . “i am building a fire, and every day i train, i add more fuel. at just the right moment, i

1 936 Olympics - . by: jackson recht. learning target . i will use primary and secondary sources to explain historical

The Modern Olympics - . athleticism, glory, politics, and spectacle . 1936 olympics. the impact of jesse owens. rise of

Rio Olympics: Day 12 - Highlights from the twelfth day of competition at the rio