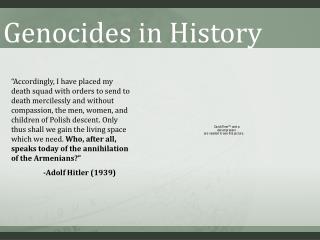 Genocides - . by: edgar p. &amp; mary katherine m. what is a genocide?. the deliberate extermination of a specific

TO UNDERSTAND JEWISH AND ROMA GENOCIDES - . a specific vocabulary. between holocaust and

Genocide and human behavior: The Holocaust and other genocides - All the people like us are we, and everyone else is

Topic: “The Devil Came on Horseback”-Ethnic Cleansing and Genocides - . aim: for what reasons do ethnicities

History in Review - . enlightenment, types of governments and types of economic systems. established the principle that

Artists in History - Create a one small colored reproduction for each artists listed. each reproduction must be labeled

Wars in History - . a look at the politics behind the wars of the past by michael cannito ronen peled christina

Intolerance in History - . 8t 2010. “intolerance has been the curse of every age and state.”. - samuel davies.

History in the - . bible. theology. ( greek theo – god, logios – study or discourse) the study of god , his sayings,