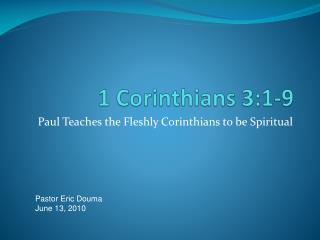 1 CORINTHIANS 13 For Today! - . ♫ turn on your speakers!. click to advance slides. for those of you who are not

1 Corinthians 3 - . advanced christianity ii: christian stewardship. the defectiveness of human wisdom. for when one

1 Corinthians 15:3-4 - . for i delivered to you as of first importance what i also received, that christ died for our

1 Corinthians 2:1-5 - . and i, brethren, when i came to you, came not with excellency of speech or of wisdom, declaring

1 Corinthians 13: Love - . paul discusses love without… sentimentality sensuality sexuality he does not equate it with

1 Corinthians 15:1-2 ESV - 1 now i would remind you, brothers, of the gospel i preached to you, which you received, in

1 Corinthians - . by robin ademaj and devon castiello. author. one of the 21 letters written by paul. written around 56

1 Timothy 3:15 - . but if i am delayed, i write so that you may know how you ought to conduct yourself in the house of