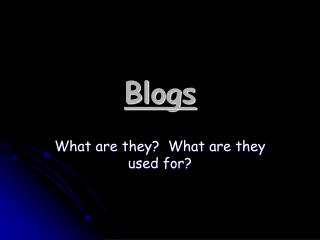 Blogs - . what is a blog? why blog? how do i create a blog?. blogs-what. blogs-why. reason 1: sharing news and

Blogs - . questions. what do you know about blogs? do any of you personally use any type of blogging site (twitter,

Blogs - . how are blogs going? easier to blog now that you have the “about” section written? are you enjoying writing

Blogs - . camille andrews &amp; aaron suggs january 2006. overview. what are blogs? examples how to find blogs how to

Blogs! - . by rifad bhuyia. what is a blog?. a personal website or web page on which an individual records opinions,

Blogs - . by amer melebari – www.6efy.com. blogs. the definition of word blog in wikipedia:. a blog (a contraction of

Blogs - . definition. a blog is a personal diary. a daily pulpit. a collaborative space. a political soapbox. a