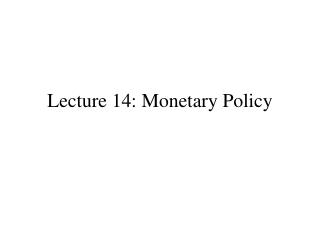 Lecture 14: Monetary Policy Bank of England 1694 Granted monopoly on joint stock banking by Parliament in return for war loans. Not an invention of economists, started off as a powerful bank that was able to demand that other banks held deposits in it.

Lecture Outlines Chapter 7 Environment: The Science behind the Stories 4th Edition Withgott/Brennan - . this lecture will