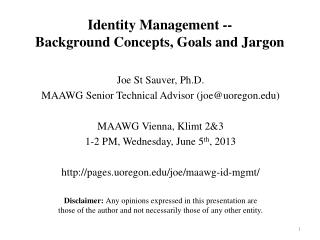 Background &amp; the jargon 1 / 2 - . facility the building itself? entity - a legal term a place where services /

Module 1: Identity Goals - . understand how to do a close reading of a text annotate a text effectively understand plot

Jargon - . jargon is any language that acts as a barrier rather than a pathway to communication. the expression is

Jargon and DevelopmentSpeak - . what is jargon?. special language used in business, science, government, and development

Jargon - . jargon is defined as “language that is used or understood only by a select group of people.”. examples of

Authentication and Identity Management - . basis for authentication. ideally who you are practically something you know