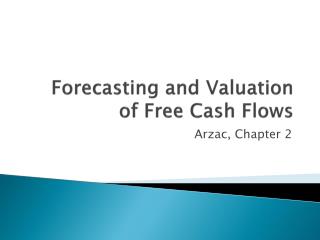 Free cash flows - In discounted cash flow (dcf) valuation, we value an asset by discounting the future cash flows we

Valuation: future growth and cash flows - . you will be wrong 100% of the time and it is okay. historical growth

Free Cash Flows (FCF) - . the microsoft example we did in class on wednesday, september 5 2007. see the word document: