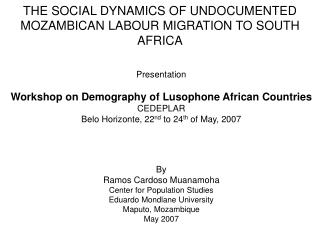 The Dynamics of Migrant Labour in South Lincolnshire

Digital Migration in South Africa - . october 2008 save our sabc libby lloyd. what does it mean to you?. how should civil

Labour Demand Trends and the Determinants of Unemployment in South Africa - . 2010 ccma commissioners indaba “against

The San of South Africa - 2:1 the meaning of culture bell ringer: interpreting the visual pg. 26 eq: what is the meaning