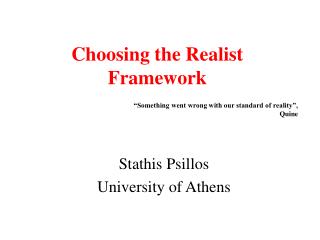 Choosing the Realist Framework. “Something went wrong with our standard of reality”, Quine. Stathis Psillos University of Athens. The aim. A way for empiricists to adopt scientific realism Realist Criminology - . objectives. that the right realism developed out of a failure of sociology to explain and

React Vs AngularJS: Choosing The Best Framework - Whenever it comes to choosing the most appropriate javascript framework

Realist Era Theater - . background. in general, the realism period was a reaction to (against) the romantic period.