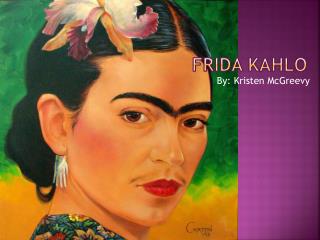 Frida Kahlo. By: Kristen McGreevy. Birthday. Frida Kahlo was born on July 6, 1907 in the house of her parents, known as La Casa Azul. La Casa Azul means the blue house. Which it is, the house is very blue. Frida Kahlo - . frida kahlo de rivera was a mexican painter, born in coyoacán , who is best known for her

Frida Kahlo - . by,lariza cavazos. her childhood. frida started to paint when she was small. she was in a bus accident

Frida Kahlo - . the mexican artist ‘ frieda kahlo’ is one of the most important 20 th century artists. frieda kahlo

FRIDA KAHLO - . the self biographical painter. frida kahlo was born in mexico on july 6, 1907. many tragedies occurred in

FRIDA KAHLO - . by: braylee gaertner. a self portrait of frida kahlo.