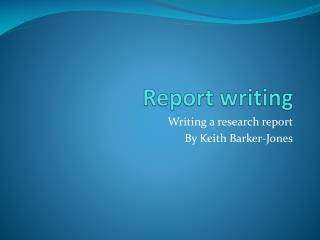 Report writing. Writing a research report By Keith Barker-Jones. Overview. Leading up to writing a dissertation a student is expected to: Prepare a project proposal Carry out a pilot study This verifies the feasibility of the methodology. Project proposal. What Did the Labour Government do? - . 1945-51. beveridge report. william beveridge – economist and social reformer.