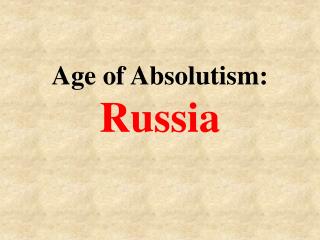 Unit 6 Part I - . absolutism and scientific revolution chapters 5 and 6. absolute rule. absolutism: period when a series

Russia Under Stalin - . part ii: stalin’s rule. final year examination. there will be one compulsory sbq with 4 part

Russia - . russia’s geography. the debate on continents. where is the dividing line between europe and asia? some say

JEOPARDY Russia #3 - . communism - 100. communism envisions political and social equality without respect to this, but

THE AGE OF ABSOLUTISM (1550-1800) - . absolutism. form of monarchical power when a ruler has a complete authority over

Absolute Monarchy In Russia - . by: luca khouri. introduction. in the early 1600s, russia was still a medieval state that