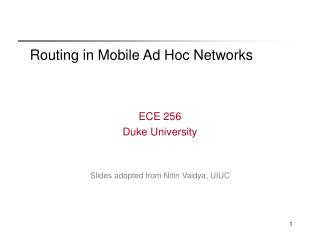 Routing in mobile ad-hoc networks (MANETs) - . 1. what is a manet ? a manet can be defined as a system of autonomous

Routing in Ad-Hoc Networks - And the dsr protocol. routing in ad-hoc networks. routing overview. we have a network with