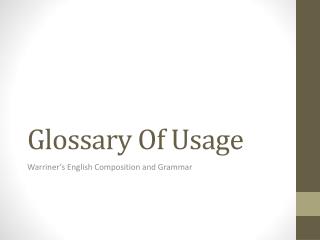 GNS 430 Basic Usage - . vfr gps usage. disclaimer. this briefing is to designed to give an introductory overview so that

Glossary of Hotel Management by Hamed Poursharafoddin - Both in english and

Glossary Terms - . foreshadowing-when author uses hints/clues to prepare readers for what will happen next in the story