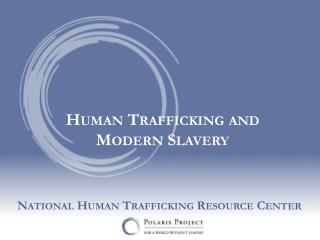 Human Trafficking and Modern Slavery. National Human Trafficking Resource Center. Named after the North Star that guided slaves towards freedom along the Underground Railroad, Polaris Project’s vision is for a world without slavery. Modern Slavery - . spreading awareness the vision. getting the attention of others and educating them on the reality

TRAFFICKING The silent slavery - . slavery has been abolished in most countries in the 1800s, but it still exists in the

HUMAN TRAFFICKING - . pray. share. be aware. www.befree58.org. be free. who are we? where did we start? what is our

Human Trafficking - . modern day slavery in canada. maria’s story (“happening”). “my name is maria and i am 24

Human Trafficking - . “…elements of force, fraud, or coercion that are used to control people... tied to inducing