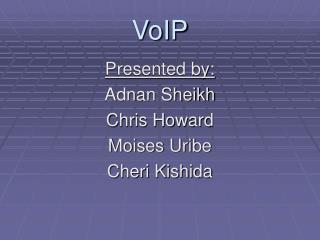 VoIP. Presented by: Adnan Sheikh Chris Howard Moises Uribe Cheri Kishida. Overview. The History of this new technology. What is Internet Telephony? How does it work? What are the Pros/Cons? What are some of the companies that provide VoIP?. Objectives. VoIP - . voice over internet protocol or “it is not voice over ip; it is everything over ip…” bob pepper, fcc.

VOIP - . (voice over ip) yonca cumurcu koray kurt. today, we will deal with;. what is voip? ways of using voip? what is

VoIP - . { voice over ip }. what is voip?. the transportation of packets containing voice data over a network (lan,

VoIP - . tdc 364. what is voip used for?. reduced long-distance costs some cite this as a large business savings

VoIP - . voice over internet protocol. what is voip? types of voip services? how does it work? benefits &amp;