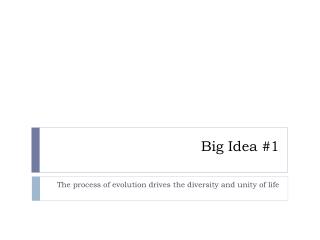 Big Idea #1. The process of evolution drives the diversity and unity of life. Natural selection is a major mechanism of evolution. BIG IDEA: - Micro and macro economic, investment and prudential decisions are made on the basis of financial reporting by

Big Idea: - . air is something real and takes up space.

Big Idea - . the ocean is important yet relatively unexplored. the science of marine biology.

BIG IDEA: - The american war in indochina changed australian society by promoting a modern liberal democracy that was

Big Idea 1 - . ch. 26 – the tree of life. geologic history and biological history have been episodic, marked by

Big Idea 10 : - . forms of energy description a. energy is involved in all physical processes and is a unifying concept

Big Idea 13: Force and Motion - . by mrs. shaw. force and changes of motion . main ideas: a. it takes energy to change

Big idea 2 - . cellular processes: energy and communication. essential questions. how is the cell the basic unit of life?

Big Idea #6 - . “any bond or intermolecular attraction that can be formed can be broken. these two processes are in