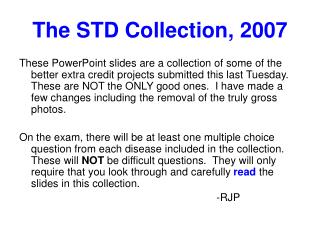 The STD Collection, 2007. These PowerPoint slides are a collection of some of the better extra credit projects submitted this last Tuesday. These are NOT the ONLY good ones. I have made a few changes including the removal of the truly gross photos. STD Definition - . std - is defined as a sexually transmitted disease. presentation will cover these topics related to

How STD - Jeopardy game rules. board with six topicseach topic has five questionsquestions are given point amounts