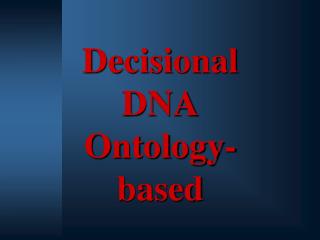 Decisional DNA Ontology-based. Ontology. In philosophy: It is the most fundamental branch of metaphysics. It studies being or existence. Tries to find out what entities and what types of entities exist. In Computer Science: It is the explicit specification of a conceptualization. Ontology Based Context Model - . yingyi bu njuics. what is context?. any information that can be used

Ontology-based Software Engineering - . shao-yen cheng. date. software “ engineering ”. are you calling yourself an