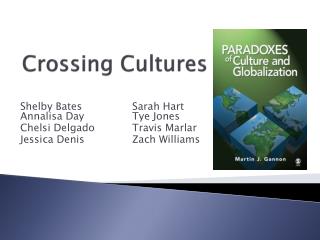 Crossing Cultures - It's everyone's business. introduction. this presentation provides background information on the

Crossing Cultures - . a look at how journalism and media ethics can vary by country and what influences those

Crossing Disciplines - . 跨 学科. big question. how could (or should?) the kinds of processes we have observed help us