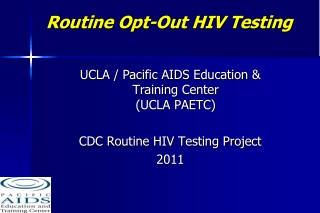 PMTCT and Opt Out Testing in Mozambique

Opt in vs. Opt out - . emmanuel gybels. introductionary remark : there is not one answer to this question – approach

No Opt Out - . teach like a champion by doug lemov. marshall, gate, professional-development goal 2012-13. each year,

Toward Universal HIV Testing: Is the CDC Recommendation for ‘Opt-Out’ Screening the Answer? - . anish mahajan ,

Toward Universal HIV Testing: Is the CDC Recommendation of “Opt-out” Screening the Answer? - . jacqueline rurangirwa,