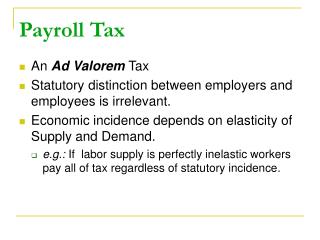 Payroll Tax. An Ad Valorem Tax Statutory distinction between employers and employees is irrelevant. Economic incidence depends on elasticity of Supply and Demand. e.g.: If labor supply is perfectly inelastic workers pay all of tax regardless of statutory incidence. . Capital Taxation . PAYROLL TAX LAIBILITY - MARTINOWEST - Establishing a business in california is not easy. to start a business we all need

Payroll Liabilities and Tax Records - . chapter 13. analyzing and journalizing the payroll. when a business has more than

TAX, PAYROLL AND PERSONAL FINANCE CALCULATORS - This section includes a library of over one hundred financial