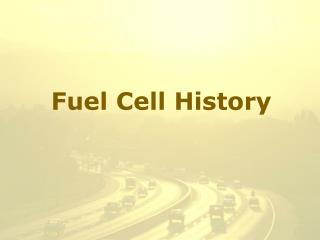 Fuel Cell History. Fuel Cells - The First 120 Years. In 1800, British scientists William Nicholson and Anthony Carlisle had described the process of using electricity to decompose water into hydrogen and oxygen Fuel Cell Challenge - . has developed a new challenge that will soon be available to teachers! engineering design

Hydrogen Fuel Cell - . by: matthew buza. time for a change. whats wrong with what we have now? what are the alternatives?