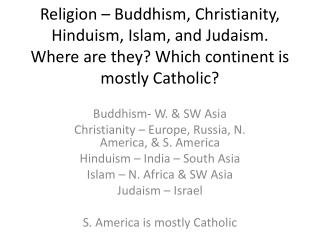 ACCESS TO SUCCESS IN AMERICA: Where are We? What Can We Do? - . the state of education summit las cruces, nm august,

Day I- Essential Question - . what was the relationship between early peoples and their environment?. unit 1 world

Cabeza De Vaca - . the age of discovery. spanish and portuguese empire in north and south america . the age of

Christianity Under the Siege of Neopaganism - . america is the last bastion of christianity in the world today, where