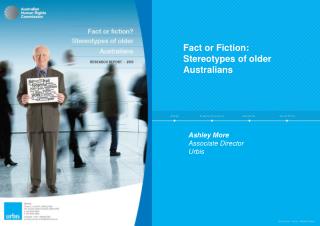 Fact or Fiction: Stereotypes of older Australians . Ashley More Associate Director Urbis. Final Presentation . A quick background to the research Headline findings The context of age discrimination Australians’ attitudes and behaviors The role and influence of the media So what? .

Treating Insomnia in Older Adults - Almost half of all older adults report problems with insomnia, defined as difficulty

Unit 10 Text I The Transaction - . lead-in questions. 1. do you often read fiction? and have you ever wondered how

What is the best way to find the truth? - . fiction and nonfiction . fiction a made up story can tell about things that

Active for Later Life - . making the case for physical activity and older people. what do we mean by ‘older people’?

Nutrition in Older Adults - Objectives. understand the importance of proper nutrition in the older adultdiscuss the

Herbie - . rod serling. what type of genre?. science fiction drama teleplay. what is a drama?. it is a play!. what is

The Health Benefits of Drinking Tea… Fact or Fiction? - By: payton seelinger what is tea? camellia sinensis history of